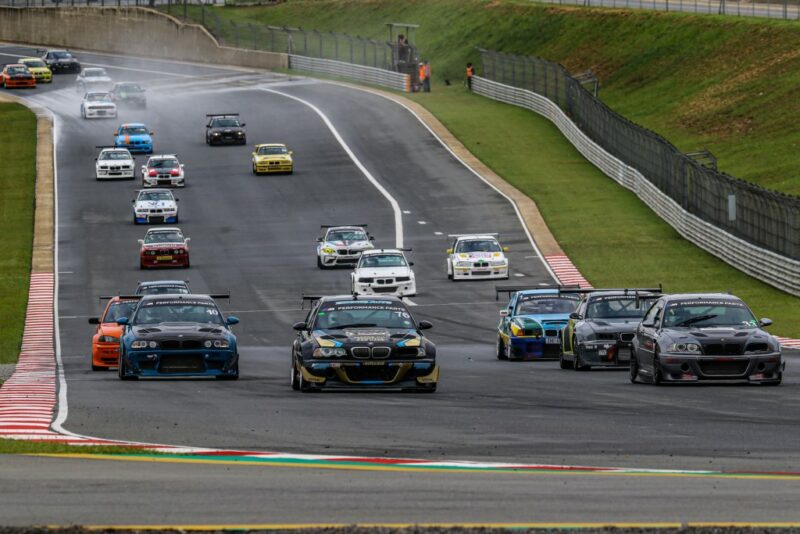 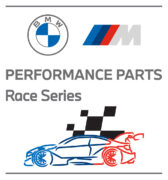 Heroes all! That arguably is the only way to describe the BMW ///M Performance Parts Race Series field after two days of trials and tribulations at Kyalami. Over 40 entries were received and split into Classes A & B and C, D & E. Friday morning’s qualifying session for A & B saw Paulo Loureiro, back in the fold after a long absence, put his Combined Racing BMW F30 335i in pole position ahead of Adrian Dalton and Rick Loureiro. In Class B young Jagger Robertson pipped The German, Andreas Meier to top spot on the grid, with Jan Eversteyn right behind the pair.

At the start of race 1 they hurtled down the long straight into turn 1 but Paulo Loureiro and Adrian Dalton came together under braking and chaos ensued. Rick Loureiro took over the lead ahead of Darren Winterboer. In Class B Robertson led Meier, Eversteyn and Carlo Garbini.  The German then passed young Jagger and took control of proceedings. After mechanical problems beset Rick Loureiro and Winterboer Meier then inherited the outright lead which he kept to the flag.

After experiencing problems with the kill switch, just like at Zwartkops a week earlier, William Einkamerer came from down the field to claim second spot, and the win in Class A. Robertson finished third ahead of a hard charging Thomas Potgieter. Paulo Loureiro scythed his way through the field and recovered to finish in 5th place.

In Classes C, D & E, a more apt description of race 1 would be a power boat race. After a huge and relentless downpour, the circuit was soon flooded but the field came out to race on their semi slicks. In qualifying Kishoor Pitamber had put the distinctive #235 in pole position ahead of Lyle Ramsay and Mish-Al Sing. Dawie Olivier was pole man in Class D while in Class E Nicholas Fisher was the fastest.

Under a very wet start to the race off they went with Pitamber leading Sing and Ramsay with Olivier not far behind. Manny Ribeiro soon showed his rain mastery in the worsening conditions, but it was becoming more and more difficult just to stay on the black stuff. With no rain in quite a long time in a race, many drivers had no functioning wipers and the inevitable fogging up of windscreens made things impossible for a few who chose to retire.

The rest of the field gingerly reeled off the laps with Mish-Al Sing in Class C leading home Manny Ribeiro in Class D in a display of dexterity in the worst conditions. Dawie Olivier also showed his class and skill with an excellent third, fogged up windows included!  The relatively inexperienced Hein van der Merwe was fourth, another impressive performance. Nicholas Fischer took the Class E victory ahead of Rupert Giessing. In the torrid conditions everyone was just relieved to have seen the chequered flag.

TV coverage from 08:30 on Saturday offered the option of one race for all classes at 09:15 which everyone accepted. While we all cast anxious looks at a menacingly grey sky the circuit thankfully did not have to contend with more water. There was still plenty from the day before which would make things tricky early in the morning, but the rain held off for the day which was most welcome for the international visitors and the main event as well.

Fabio Fedetto led them away from pole position and the Class A crowd sped away with Dalton and Paulo Loureiro locked in a fierce battle with Rick Loureiro in close quoters ready to pick up the pieces. No sooner had the rest negotiated the turn 1 hairpin and then the right hander that follows when Matthew Wadeley slid off into the barrier lining the outside of the track heavily damaging his beloved #317. Varish Ganpath then exited the stage literally at the next corner, spinning in the slippery conditions.

Andreas Meier soon had his hands full with a relay switch in his steering wheel which failed to send signals to his gearbox depriving him of anything other than first gear. His mastery in trying to keep his car going while doing what he could to solve the problem is worthy of a magician’s act. He sort-of managed and soldiered on to eventually finish the race and score points! The young man on the move however was Jagger Robertson in Class B. He cut through the traffic ruthlessly with Jan Eversteyn in tow.

In Class C Mish-Al Sing was ready for more heroics, his ex-Tony Viana replica BMW reminding us of glory days long passed. Lyle Ramsay shadowed him. Manny Ribeiro too had picked up where he’d left off the day before, cutting his way through the field in pursuit of Class D leader Eugene Gouws. In Class E Nicholas Fischer led the way. A safety car period to retrieve Ganpath’s stricken car then allowed the field to regroup and thereafter it was plain sailing for Paulo Loureiro who led home Adrian Dalton and older brother Rick Loureiro.

Jagger Robertson took the Class B victory ahead of Eversteyn and Thomas Potgieter. In Class C Sing was unbeatable, with Ramsay a close second and Kishoor Pitamber in third. Class D belonged to the indomitable Ribeiro with Gouws in second place and Nicholas van Zyl in third. A delighted Rupert Giessing led home Anand Naidu in Class E, the latter delivering an excellent performance on his first weekend in the series. Bernard de Gouveia finished third.

Not surprisingly Mish-Al Sing and Manny Ribeiro shared the coveted Driver of the Day accolade for their rain dance, such was the narrow margin between their performance levels over the two days.

After a month in which to take stock and reset, the BMW ///M Performance Parts Race Series returns on March 5 at the Red Star Raceway outside Delmas. 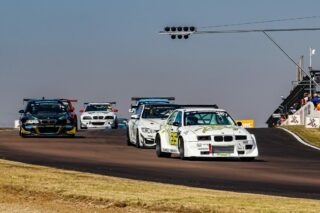 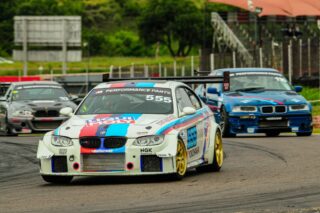 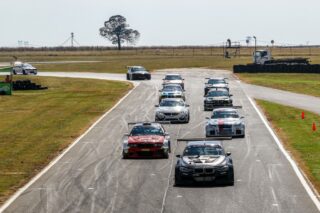