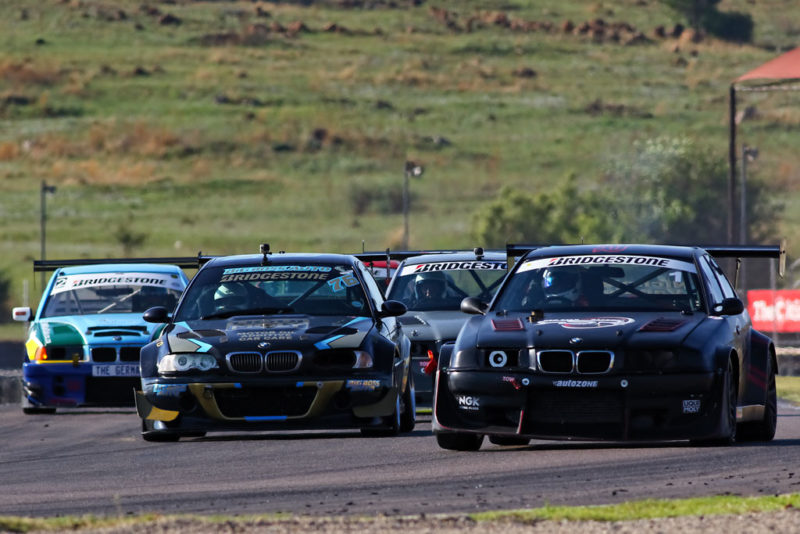 After what has seemed like an eternity, the silence in the stands turned into beautiful noise with an appreciative crowd again clapping the efforts of a varied cast in some of the best categories in the country.

In Class D Neil Reynolds (Valve Hospital BMW E36 M3) qualified ahead of Shane Grobler (Mayfair Gearbox BMW E30 325i) and Varish Ganpath (Prodigy BMW E46 325ci), while in Class E (Morgan Long (Mend-A-Roof & CRC BMW E36 328i) returned from a long absence and promptly took pole position ahead of Hein van der Merwe (Stigworx BMW E36 325i Turbo) and Rupert Giessing (BMW E36 328i). However, both Long and Hein van der Merwe had broken out of the Class E time and would start in Class D, which left Rupert Giessing in top spot ahead of Nicholas Fischer (Inside Active Group E36 328i).

On a busy programme for the day, the BMW Race Series got their first race underway early in the afternoon heat and Dalton jumped into an immediate lead followed by Einkamerer. Garbini, Meier and Jagger Robertson (Viking/Big Boss Auto BMW E46 M3) followed them closely, with Wadeley putting some Class B cars between himself and Lyle Ramsay at the head of Class C.

In Class D Neil Reynolds was off in a flash with Grobler and Ganpath trying to keep him in their sights. At the front Dalton extended his lead while Garbini and Meier fought it out for top spot in Class B with Robertson in close proximity.  Wadeley was keeping the Class C pack at bay with Ramsay hot on his heels, while Ganpath and Shane Grobler (Mayfair Gearbox BMW E30 325i) enjoyed a good scrap behind Class D leader Reynolds. Fischer led Class E after passing Giessing on the opening lap.

With just a few laps to go, Oz Biagioni (Design Lab/VR Fuels BMW E46 M3) then ran off the road at turn 5 as a result, he suspected, of a broken shock. With his car stopped in a precarious spot, the safety car was brought out. In the ensuing confusion Adrian Dalton and Carlo Garbini were deemed to have passed other competitors, although backmarkers, under the yellow flags and were penalized post-race, which was declared finished after 8 of 10 laps completed. The red flag was brought out to stop proceedings because Biagioni’s car could not be extricated safely under the safety car.

William Einkamerer took the victory ahead of Meier and Robertson. Wadeley clinched the Class C victory ahead of Ramsay, Reynolds was unbeaten in Class D and Ganpath had to settle for the second spot, while Nicholas Fischer took top spot in Class E ahead of Giessing.

Fabio Fedetto (BMW F82 M4) led the pack into race 2, but both Dalton and Einkamerer were soon past as they hurtled into the hairpin. The traffic jam behind them sorted itself out after a couple of laps, and motoring scribe Mark Jones (Savspeed Racing BMW E90 335i) initially led Class B ahead of Alan Hilligenn (C3 Shared Services BMW E46 328i Turbo).

Nek Makris (BMW E46 328i Turbo) was in front in Class C with Troy Cochran (Arrow Automotive/ATE BMW E36 M3) in close attendance, and Bernard de Gouveia (BMW E46 325i Touring) had the Class D pack chasing him. In Class E Nicholas Fischer took the lead. But the form men soon asserted themselves at the front of the respective classes. With Dalton pulling away at the front, Hilligenn fell into young Robertson’s clutches, while Makris and Cochran made contact and retired from the race. The pair had already tripped over one another in qualifying so both had a day to forget.

After both cars were moved out of harm’s way, and yellow flags withdrawn, racing resumed and young Jagger Robertson took the lead of Class B with Garbini and Meier giving chase. Salvi Gualtieri (Savspeed/Eataly Foods BMW E36 328i Turbo) meanwhile had developed power steering problems and his day was done. Jones was another retirement with fuel injection problems. Thomas Potgieter (Stonehill Properties BMW E36 M3 Turbo) was making an excellent debut in the ex-David Coetzee car and was engaged in a spirited dice with outgoing champion Nicholas van Zyl (RSR BMW E36 328i Turbo).

Lyle Ramsay was in front in Class C with Wadeley eager to repeat the morning’s result and looking to take the lead from him. In Class D Ganpath led with Reynolds facing some resistance from Grobler whom he eventually passed. In Class E Nicholas Fischer was heading for a double for the day. But the drama wasn’t over.

Garbini then passed Robertson in the closing stages but slowed with power steering problems and slid down the order. Andreas Meier then also got the better of young Robertson on the final lap to claim his double in Class B and Thomas Potgieter finishing in a satisfactory third. Ramsay then slowed with mechanical issues and Wadeley duly capitalized with another win. Renier Smith had to settle for third as the flag dropped before he could catch second placed man Ramsay. Ganpath took Class D ahead of Reynolds this time round, and Fischer winning Class E with Mike Grobler (Grobler Motorsport BMW E36 328i) in second ahead of third placed man Spiro Makris.

The day’s brace of wins gave The German an unassailable lead in the class and overall championship with one round remaining. It also earned him the coveted Driver of the Day award.

Kyalami will now host the last round of this year’s championship at which the BMW Club Racing Series will be a support category for this year’s Intercontinental GT Challenge 9 Hour race on the weekend of the 3rd and 4th of December.

After a partnership spanning 14 years, Bridgestone has ended its sponsorship of the BMW Race Series to pursue other interests. The BMW Car Club Gauteng and everyone associated with the Series would like to thank Bridgestone for their commitment during that time. After starting with track day events, the Series grew into a championship 10 years ago and has enjoyed enormous success and continues to do so. BMW Race Series would like to wish Bridgestone every success in their future endeavours. 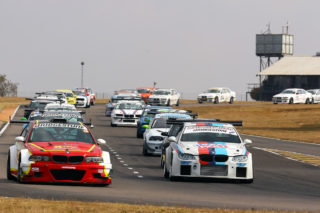 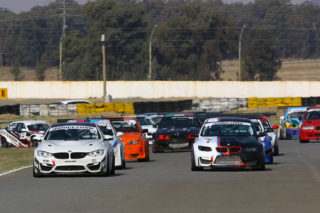 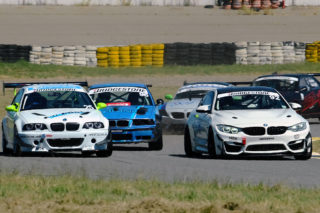 A new champion emerged, spectators returned, and the racing did not disappoint