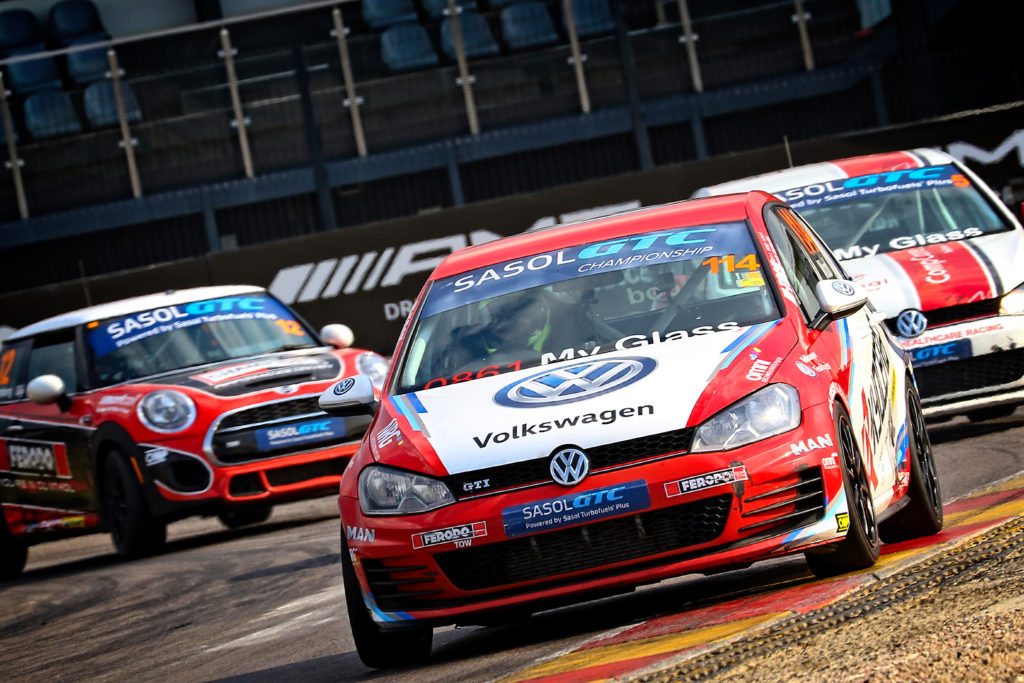 A trying and testing debut season for Adrian Wood in the Sasol GTC2 championship finished on a high with him taking his maiden victory. The series finale hosted at Zwartkops Raceway on October 19-20 also saw him secure fifth place in the championship.

Friday morning started with mechanical problems for Wood during the first practice session. Further diagnoses of the Kyocera Volkswagen Golf resulted in a call to replace the engine. Although the Volkswagen Motorsport team swiftly carried out this task, he was not able to participate in the second practice session. While having extended running time during the third session, Wood would always be on the back-foot during qualifying on Saturday morning. He qualified in sixth position on the grid for Race 1.

The first race on Saturday produced a host of cat-and-mouse battles around the 2.4km circuit outside Pretoria; notorious for not allowing many passing opportunities. Wood retained his sixth position throughout the race while his team mate Keagan Masters wrapped up his second consecutive title at the front of the field.

The afternoon’s final championship race saw Wood in pole position based on the inverted grid system. Wood made a strong start to retain the lead, but a red-flag on the opening lap saw the field having to regroup at the start line. The second attempt saw Wood making another good start which allowed him to maintain his pace up front while the rest of the field were jostling for position behind him. During the closing stages Wood had to hold off Trevor Bland; this he did successfully to take his maiden win.

“it was a day of achieving both team and individual goals, it’s definitely one that we’ll be celebrating tonight.” Said Wood following the second race. “Although we had problems yesterday, I never had any doubt about Volkswagen Motorsport’s ability to have me back on track and competitive. I’d like to congratulate Keagan on his successful championship defence as well”

Wood continues about his maiden victory: “it was a now or never situation. We’ve worked hard throughout the season and really wanted to add a victory to our achievements. I knew I would have the upper hand from the reverse grid and it was crucial to build an advantage while my rivals made their way through the pack. I’d like to dedicate this win to our partners Kyocera Document Solutions South Africa, NRG Office Solutions, Omni Technologies and Volkswagen Motorsport South Africa as a gesture of thank you for all the support throughout 2018.”