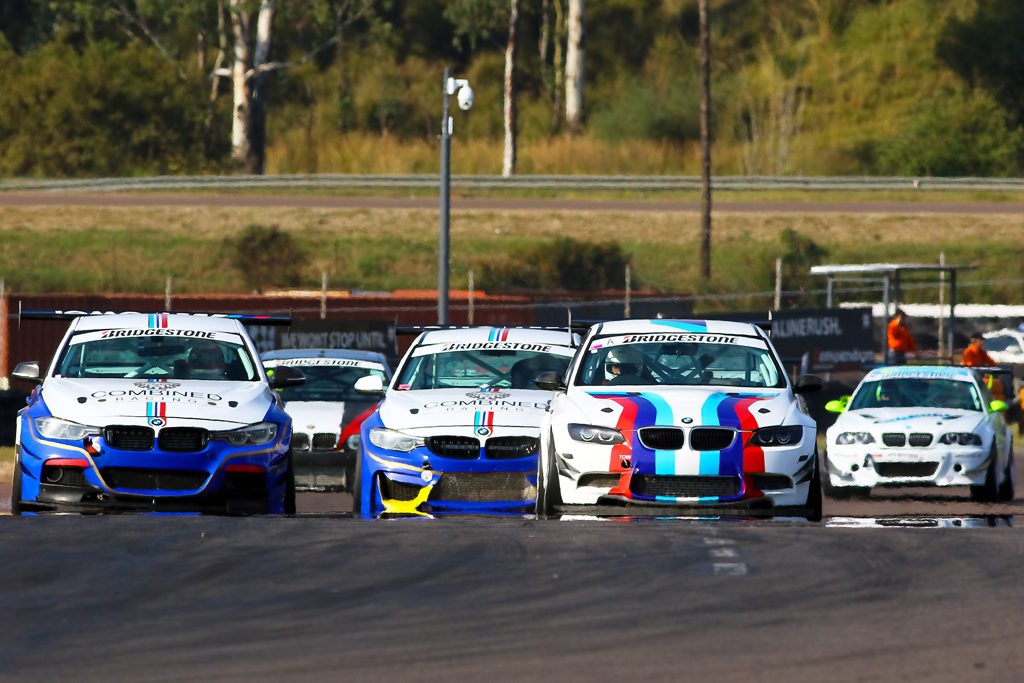 Round 4 of the 2019 Bridgestone BMW Club Racing Series played off at the popular Zwartkops Raceway as part of the second instalment of the Bridgestone Track and Race Day on Saturday, the 11th of May 2019. As expected, this round delivered another upset with some not making it to the grid due to mechanical issues.

The first race would see some open spots on the grid as mechanical gremlins got the better of some of the entrants. Meier, Gobey, Renier Smith (BMW E36 M3), Salvi Gualtieri (Eataly/Papa Mario’s/Savspeed BMW E36 328i), Shaun Dodd (CRS Auto BMW E90 330i) and Matthew Wadeley (P&G Digital BMW E36 M3) was out for the count even before the race started.

As the lights went out it would be Rick taking a firm lead of the race and Class A with Paulo slotting in behind him and Turner in third. An out of place Stefano Martinelli (Dalucon Insulated Panels BMW E90 335i) starting at the back of the grid due to not qualifying had a huge task ahead of him. Rick did a sterling job of keeping brother Paulo at bay for the remainder of the race while Turner was forced to retire with mechanical bothers after completing only four laps. Martinelli was however the man to watch as he made his way through the field. From the start and at the end of the first lap he was sitting pretty in twelfth overall. From there he gradually worked his way through an ever-stretching field to finish third in class and fifth overall.

Eversteyn took no prisoners as he grabbed the lead in Class B and did not look back again. He would go on to take a resounding victory in the first race of the day. For all he tried, Oz Biagioni simply could not close the gap to Eversteyn. He however had a low flying Craig Ball to contend with in the opening laps. The break from racing saw a returning Ball break out of class in lap 2 already. The superiority of machine however saw Biagioni steadily pull away from Ball to secure his second spot on the podium leaving the third step vacant for Ball to fill.

Fireworks were expected in Class C boasting with so many evenly matched cars. However, attrition would hit them the hardest robbing the spectators from a promised nail-biting race. But all was not lost as Troy Cochran took the lead into the first corner with Nek Macris (BMW E46 328i Turbo) hot on his heals followed closely by Shane Grobler (Mayfair Gearbox BMW E36 330i) and Pieter Lombard (SMS Alert BMW E36 M3 GTS). An ailing car also sent Lombard into retirement after six laps. A proper ding-ding battle ensued between Cochran and Macris. An ever improving Macris however broke out of class as he fought hard to get past Cochran. This saw him opting for a thirty second penalty handing the Class C victory to Cochran. That also elevated Grobler to the second step of the podium and Macris had to be satisfied with third in class.

With no one to challenge him, Alan Hilligenn had a lonely race as he took the win in Class D ahead of Klippies Krige (BMW E36 M3). Clutch problems kept Bernard De Gouveia (De Gouveia Accountants BMW E36 328i) from completing the first lap and saw him retire to the pits as well. Class E saw season newcomer Nicholas Van Zyl grab the lead into the first corner in front of Rupert Giessing (Bridgestone BMW E36 328i) and another series debutant Cor Kraamwinkel (BMW 2002) with the rest of the field in tow. Carlos Gameiro (Lapace Racing BMW E30 325is) was however a man on a mission making short work of passing Colin Van Son (Bridgestone BMW E46 325i Touring) on the opening lap and setting his sights on Giessing and the rest of the field in front of him. Giessing passed Kraamwinkel on the following lap but Gameiro was nailed to his bumper, also at the same time passing Kraamwinkel. On the next lap Gameiro shot past Giessing and started to chase down Van Zyl before he disappeared out of sight. With consistence performance he caught Van Zyl napping to pass him on the fifth lap. Van Zyl would however have nothing of it and fought back to eventually get past Gameiro in the dying stages of the race taking a resounding victory in Class E. Gameiro had to settle for second with Giessing taking third.

With a few cars repaired and the customary inverted grid from best laps in Race 1 the second race showed promise of being a more exciting race than the first on the day. Polesitter Martinelli and Paulo Loureiro next to him on the front row was caught napping at the start which allowed Rick Loureiro to pass them both on the outside through turn 1 into 2. This was short-lived as Martinelli took the lead again before the end of the lap. Rick was however not going to let it slip and stuck to him like glue with brother Paulo also in close proximity. Martinelli warded off every onslaught from the Loureiro brothers to eventually take his first race win for the season in glorious style. Rick had to settle for second and Paulo occupied the third step of the podium this time round.

Some of the best action on the day came in the Class B race with Andreas Meier (BMW E36 SAT Car) starting from right at the back of the grid after not competing in Race 1. Car repaired he was out for damage limitation and only one goal in mind, a win in Class B. But for that to happen he had to make his way through the field starting with the Class E then D cars. After the first lap he was in thirteenth overall about to pass Neil Reynolds (Valve Hospital BMW E36 M3) at the back of Class C. Meanwhile in front of him Eversteyn made short work of getting past poleman Mike Grobler (BMW E39 M5), Biagioni and Ball on the opening lap allowing him the opportunity to create as big a gap as possible to the rest of the Class B field. In the next few laps Meier put in the one fast lap after the other, missing class breakout by 0.053 of a second! His brilliant racing knew no bounds and by the seventh lap he was clear of the class B field setting after leader Eversteyn. The damage was done with Eversteyn breaking away so quick from the start that Meier only just ran out of laps finishing but a second behind Eversteyn. Biagioni had to settle for third this time round.

The Class C grid also delivered on their promise for entertainment. Now the newly crowned “Brat Pack” saw Troy Cochran take full advantage of the gaping space in front of him from the start. Even though he brilliantly pulled away from the rest of the field, unfortunately for him, it was later judged a jump-start for which he received a thirty second penalty. Behind him however the race was on between Shane Grobler, Nek Macris, first race retiree Shaun Lamprecht and Class B’s Mike Grobler also in the mix. Neil Reynolds kept a close eye on them ready to pounce in case someone made a mistake. In one foul swoop both Macris and Lamprecht got past father and son duo, Mike and Shane Grobler leaving Reynolds stuck behind them. With no points in the bag from Race 1 Lamprecht was in it to win it. Macris put on a brave defence but Lamprecht got the better of him after a couple of laps to take the win in Class C. Macris’ troubles were not over as Shane started hounding him for the second spot on the podium. This time round Macris successfully defended the position finishing in a satisfying second and Shane Grobler in third.

Another runaway victory saw seasoned veteran Alan Hilligenn make it a double win for the day in Class D ahead of Klippies Krige. Starting from the back of the grid saw Bernard De Gouveia take third. Polesitter Colin Van Son lost the Class E lead early on to Kraamwinkel. As they came around completing the first lap Van Zyl was in second and Giessing third. After completing only two laps it was Kraamwinkel’s turn to retire to the pits with mechanical maladies. Gameiro was however once again on a mission as he made progress up the order. This time round Van Zyl did not put a foot wrong and took a second Class E victory on the trot. Gameiro once again only managed second with Giessing finishing in third.

Troy Cochran (Arrow Automotive BMW E36 M3) received the celebrated Driver of the Day award for his consistent performance in a new car throughout the day.

With the championship now wide open, will those with the past nightmare of mechanical issues be hoping it is ancient history as they head into Round 5 of the 2019 Bridgestone BMW Club Racing Series championship. This round will form part of the Inland and Historic Championship to be held at the Red Star Raceway outside Delmas on Saturday, the 22nd of June.